Tesla Model S: Too much money, too great a risk 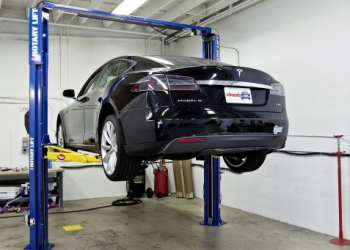 So here I am. I drove it I like it. Do I $70K like it?  No. Here is why; The car looks sharp, but its almost a carbon copy of the current Jaguar model. Not surprisingly so because the Tesla designer came from Jaguar and when he left there, they must have had the designs in the drawer already. Why copy ?

The big concern everyone has with electric car is related to the battery - will it perform? How long will it last ? That coupled with range anxiety is understandable and Tesla addressed those concerns well. The cars have a 100K miles warranty on the batteries, and really an electric motor will never fail you. The motor is also a no brainer, because electric motors have been around for 100 years and the brushless design is technically relatively simple and u likely to encounter major issues.

I see possible issues elsewhere. A car is not just engine and batteries. Granted 95% of the moving parts have been removed as we switched from combustion engine to electric, but there are still plenty of parts left. The whole interior, dashboard, seats, electronics, everything that is part of the chassis. All this needs to be assembled and stay in place for they next 100K miles or more .Tesla has never done this or been able to test it.

What makes a Mercedes different from a Ford? Nothing in the Mercedes will rattle or come lose or squeak - try anything from GM and you’ll have a different experience after 10,000 miles. It’s that quality of workmanship that can only be done with many decades of experience, which Tesla does not have. GM still doesn’t have it (although one could argue that they have built in obsolecense to keep the parts business going and to sell you new cars). Model S is priced on par with a 5 Series BMW or an Audi A6. It doesn’t compete. As much as I love the principle of an electric car, Model S is nowhere near an Audi, Mercedes or anything else in that class.

The interior design is poor, take a close look at the stitches on the dashboard and the way components are put together. Parts of the interior were already coming off (they used clips or velcro to keep it together). I think after 20K miles of open road or sooner the interior will come apart. It doesn’t feel right when you look at it. The connections are not clean, it all looks cheaply put together.  Well maybe this is unfair. It looks great at first glance, but I am used to BMW and Audi quality and ergonmics and this doesn't even come close. It look like someone put a TV in the dashboard, the UI is clunky and huge. Again, i understand that its Version 1 and for that its great, but its not an Audi. Far, far far off.

Now what happens if these cars start squeaking and cracking all over in a year? Guess what will happen to